To be sure, there are a lot of storied rivalries in college athletics, but the one between Stanford and Cal is unique is so many different areas, and why it’s held in such affection between the communities of the two schools.  Cal and Stanford are only separated by 40 miles.  One is private the other is public. One has multiple elements on the periodic table (Californium, Berkelium and Seaborgium just to name a few) , the other, well  there’s still no Stanfordium (oh no he didn’t, PERIODIC TABLE SMACK DOWN!!). But most importantly, these are two of the premier academic institutions in the world, both regularly appearing in  the top 10 of world listings – Stanford almost always in the top 3 of private schools and Cal almost always the #1 public school.  And one of the very cool aspects is because the Bay Area is such an amazing place, the whole region is filled with alumni of each institution who see each other every day in their work, social lives, philanthropic arenas, you name it. This is one of the key parts of winning the Big Game – bragging rights!!!

So as between good friends, we like to play jokes on each other – and the Big Game is just ripe for such fun. I don’t think I’m getting old when I say it seems like more of this happened in the “old days,” a category that my time at Cal is sadly starting to enter!   So here’s the story about how in 1990 a group of enterprising Cal students tricked Stanford into cancelling its own Big Game bonfire rally – in the grand tradition of Big Game pranks!

B.U.S.T.  – Burn the Ugly Stanfurd Tree – was a “secret” group at Cal whose main charter was to devise a way to foil Stanford.  And to drink.  Now I’ve put up the old member list here to really drive home how it was another time and place. See anything missing? Yeah, area codes.  Back then the entire Bay Area was 415 so no reason to list area codes! Over shots of Jaeger up at the Big C, or pints at Raleighs, or Golden Bears at Henry’s, or pitchers at the Bear’s Lair  or… wait a second I see a theme emerging here …  we would throw out idea after idea about what we could do to Stanford.  Finally we thought – you think we could trick them into cancelling their bonfire rally?  We all smiled and we knew what our mission was! 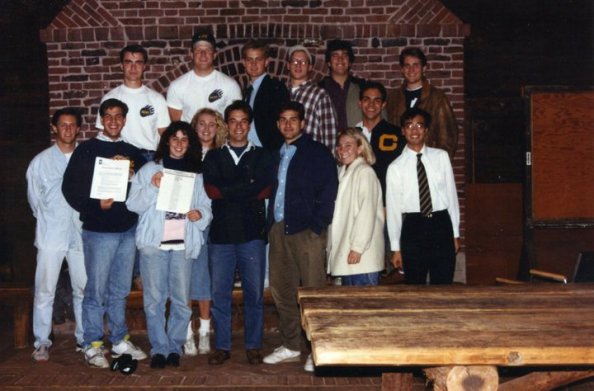 Look at the handsome group of students!  How devious could they be?

Here was the plan.  We’d capitalize on some embarrassing behavior by their band (I mean, how easy would this be) and by their students that had made news to create a directive from then-President Donald Kennedy that he had no choice but to cancel the bonfire rally.  OK, sounds fun, but how do we do it?

First we needed to create an official memo.  Again, this was pre-Internet so there was no easy way to download letterhead or forms… We had to make it ourselves.  Well turns out I had a book on the history of all college nicknames (of course I would have that book…). So I copied the Stanford logo and created some fake letterhead on an at-that-time kick-ass word processor!  Here is a photo of the original scotch-taped document. 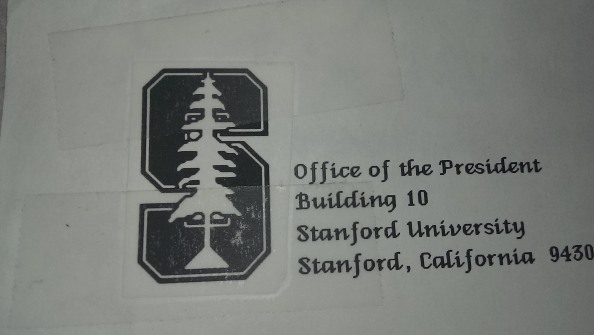 Now we had to create an official looking document that sounded like it came from the President of Stanford – just the right touch of pretentious and superciliousness –  and of course we had to plant an inside joke… so here you go and I think you’ll find our inside joke (and no it’s not that I misspelled cancelled).

And now the fun would begin!  How would be get the word out?  Remember, this is 1990, so no emails, no internet, no Facebook… Well that group of fine looking Cal students took it upon themselves to go down to Stanford in person.  Over their B.U.S.T. t-shirts on they all put button down shirts and red ties or red sweater (they felt dirty!).  Then they loaded into a few cars with hundreds of copies of the memo.  And down to Palo Alto they drove.

Now, while my brave comrades were doing that, I had to work.  But I wanted to make sure people actually knew about what we were doing.  So I called all the local media outlets and faxed over a copy of the memo to them (Oh my god, even back then I was doing PR!!).  Would it work? Again, just to give you an idea of the times, here is the note sheet I was using.

At about 6PM, we all met in Senior Hall on campus, and we found out some great stuff.  One, the B.U.S.T. group was able to circulate through the campus, posting the flyer all over.  They presented themselves as members of the President’s Student Leadership Committee. Luckily for us, Stanford students had no idea no such group existed!  But best of all, not only were they able to post the flyers,  they actually got Stanford students to post them for them, in dorms, in residence halls, at fraternities!!!  And people were really disappointed the rally had been cancelled!

And then we had to wait.  And wait.  Would they figure it out?  Would they be able to mobilize in time to save the rally?  OK, now you can go watch that video… as the planned 8PM start time for the rally approached, no one was there.  The Stanford football team showed up, no one was there.  9PM.  No one.  10PM.  A few people and now they were trying to get word out that it was a HOAX!  So they got word out that the rally would start at 11.  And in came all the broadcast news teams for live shots of the “cancelled” rally – they had ALL bit on our fax!!!!

And you know what, every single 11PM broadcast news had a story about the cancelled rally, and how it was pulled off by Cal!  And it made it into the papers the next day, even including secondary researched material by reporters!!!

And should Stanford people try and muddle or confuse or cast any doubt on the success of this, I’ll leave you with how the then-NBC affiliate KRON signed off at 11:30PM, which is the title of this post.

I hope you enjoyed this and if it does nothing else I hope it encourages our current generation of Cal students to have fun and do you what you need to do!

14 thoughts on ““Still no bonfire…” When Cal tricked Stanford into cancelling its own bonfire!!!”